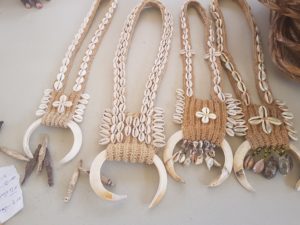 The manual, Biosecurity manual for handicrafts: Requirements for trade and movement of handicrafts in the Pacific Islands region and beyond , was launched in Guam by Director of  Agriculture, Mr. Matthew Sablan.

The manual, aimed at all level of stakeholders including handicraft producers, quarantine officials, exporters, retailers and travellers, provides a list of requirements and conditions to facilitate the movement of handicrafts and artefacts within the Pacific region. Mr. Sablan explained that the manual will help create awareness among stakeholders in the cultural industry and lead to less detainment and confiscation of handicrafts at national borders.

The manual was well received by Pacific Island delegates in attendance at FestPac. They expressed their appreciation for the initiative,  noting that such an innovative tool and resource would make it easier for them to transport crafts and sell them at cultural events throughout the Pacific, while complying with state regulations.

The manual is an initiative of the Biosecurity and Trade Division of SPC’s LRD, and an outcome of the Pacific Plant Protection Organisation’s commitment to improved biosecurity in the region. Funding was provided under AusAid’s Pacific Horticultural and Agricultural Market Access Program (PHAMA), whose mission is to maintain and improve market access for the Pacific people.