Home » News & Events » What is aquatic biosecurity, and what is its relevance for Pacific Islands region?

What is aquatic biosecurity, and what is its relevance for Pacific Islands region? 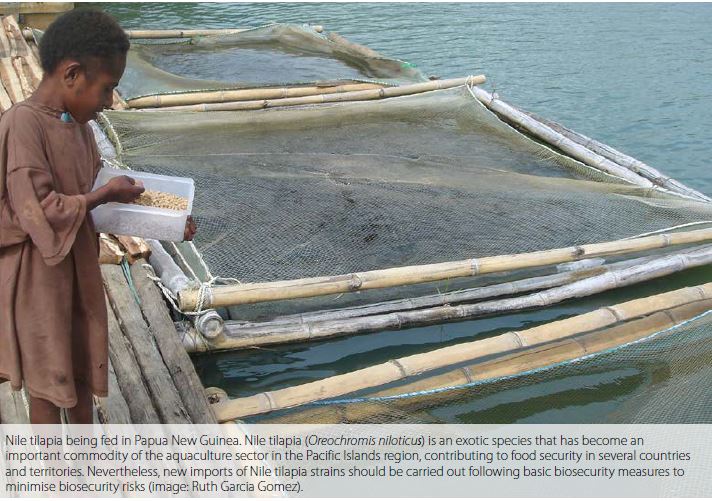 The Aquaculture Section of SPC’s Fisheries, Aquaculture and Marine Ecosystem Division of has recently launched a new aquaculture-related project funded by New Zealand called “Sustainable Pacific aquaculture development for food security and economic growth”. As a novelty for the Aquaculture Section, this project has a component dedicated to “aquatic biosecurity”, which sounds like a very abstract word, but which has very practical and real implications for the Pacific Islands region. Aquatic biosecurity could be defined as a set of standardised protocols and measures to deal with biological risks in aquatic environments, such as the risk of pathogens (causal agents of animal diseases and plant pests) and the risk of invasive species. Appropriate aquatic biosecurity measures and protocols should minimise the introduction, spread and impact of the aforementioned biological risks.

Because the aquaculture sector in the Pacific Islands region is growing, the need to streamline aquatic biosecurity measures is becoming more important for countries.

Actually, since the beginning of the project in July 2016, SPC’s Aquaculture Section has received official requests for the provision of technical assistance on aquatic biosecurity from 12 countries and territories, which indicates the current interest on the topic, and highlights the existing needs of the region.

It should be noted that, while the aquaculture sector contributes to improving food and nutrition security, and increasing livelihoods within the region, most aquatic animals successfully cultured in the region are introduced or are exotics (e.g. Nile tilapia, common carp and blue shrimp), and new species introductions are being pursued for further aquaculture development. Furthermore, aquatic animal diseases are a significant threat to the sustainability and productivity of aquaculture in the region, which is known for its high aquatic animal health standards.