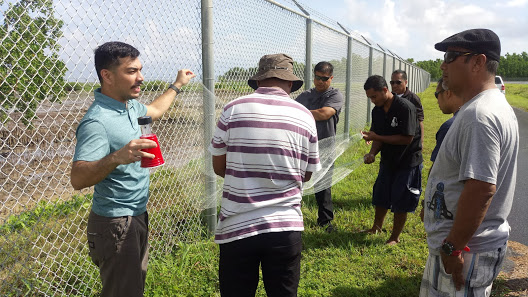 Pohnpei, FSM-A two-day invasive species training focusing on the major coconut insect pest, Coconut Rhinoceros Beetle (CRB) was held at the Pohnpei Port Authority Conference Room in Dekehtik from June 27-28, 2017.  The training was co-hosted by the Western Pacific Tropical Research Center of the University of Guam (WPTRC-UOG) in cooperation with the FSM Quarantine Services of the Department of Resources & Development.  Quarantine Specialist John Wichep, of the FSM Quarantine Services opened the training by welcoming and thanking visiting WPTRC-UOG Associate Research Biologist, Christopher Rosario and participants, notably the agencies and organizations they represented.  Wichep also expressed FSM’s sincere gratitude to the USDA Forest Service and Dr. Ross Miller of UOG for the “generous funding support in providing the CRB traps and extending the training to the FSM through Mr. Christopher Rosario.”  Wichep further commented on the importance of the training and the need for protecting the islands [FSM] from the destructive CRB and other pests and diseases of concern, citing damages it has caused on affected Pacific island countries.  He encouraged participants to be as “informal and interactive as much as possible” and to take “this great opportunity to learn more about this serious coconut palm pest and ways in controlling and managing it.”

Over 20 representatives from local border control agencies and key stakeholders of the environment and resources management organizations, including airline and shipping companies attended the two-day CRB training.  WPTRC-UOG Research Associate Biologist Rosario lectured on topics covering CRB biology, likely pathways for its spread, detection and eradication measures.  Dead adult CRB specimens were shown to participants so they know exactly what the pest looks like.  Images of CRB adults, eggs, grubs [larva], and infested and dying coconut palms were also displayed.  A ‘demo’ session was held giving participants the know-how and experience in assembling and installing CRB DeFence Trap units brought in by Mr. Rosario.

“I am happy to be in Pohnpei again, this time, to share the knowledge and research that we [WPTRC-UOG] are doing in Guam to control the Coconut Rhinoceros Beetle.  Its [CRB’s] successful behavior has had resulted in what is now known as the Guam biotype [G-biotype], of which has mutated, become genetically different and resistant to the ‘nudivirus biocontrol,’ initially used to control and suppress it on Guam.  The CRB has had decimated coconut palms on Guam and continues to spread throughout the island.  This is a regional issue as the G-biotype has been detected in Papua New Guinea, Hawaii and Solomon Islands.”  Rosario added that the University of Guam is “currently looking into a biocontrol that would hopefully, be effective in controlling the rhino beetle.  By then, such information will be shared with jurisdictions throughout the region. In the meantime, it is important we [border control agencies] are extra careful and be vigilant in our inspections of ‘high risk’ cargo arriving from ‘high risk’ areas.”

The CRB, known scientifically as Oryctes rhinoceros, is a serious coconut palm pest.  The adult rhino beetle is nocturnal [active after sunset] and is the only one that causes the damage.  It bores into trees with its horn and spiked legs to feed on the sweet sap in the heart of the palm, weakening and killing it over time.  Bore holes about one to two inches in size are symptomatic on petioles of infested coconut trees.  An inverted ‘V’-shaped leaf can be also noticed on affected palms.  “The V-shaped palm leaf can be misrepresented as CRB damage, as cutting off of coconut palm leaves or leaves in contact with adjacent utility lines can also result in new-growths being V-shaped,” explained Rosario.  “What is important though is to also investigate for bore holes at the base of the leaf structures of suspected coconut palms,” added Rosario.

The beetle has four life stages: egg-8-12 days; larvae-1st instar-10-21 days; 2nd instar-12-21 days; 3rd instar-60-165 days, pupa-17-30 days and adult-5-10 months.  The female rhino beetle lays about 100 eggs [in her lifetime] in decaying organic matter.  Once hatched, the grubs feed in organic matter, helping to break it down into compost.  It takes about 60 days for the grubs to pupate transforming into adult beetles; once the adults emerge they fly off to find food, continuing their cycle of destruction.  The beetle is known to have covered up to two miles in flight (University of Guam Brochure, n.d.).  According to Rosario, they could also hitchhike on airplanes especially in the wheel wells.  This destructive coconut palm pest is known to have nested in pandanus as well.

Given its native range of southeast Asia [primarily Indonesia and the Philippines], it has moved to other islands in the Pacific during the past century due to the increase in air and sea trade.  It was first detected in Tumon, Guam in 2007 and was reported in Oahu, Hawaii in 2013.  The rhino beetle is reported to be present in Fiji, Palau, and Samoa, infesting and killing coconut palms.  How it had gotten to the other islands is still unknown, but most likely through shipping container holding construction materials (University of Guam Brochure, n.d.).

As part of the training, several CRB traps were installed at strategic locations at the Dekehtik Sea and Airport.  “FSM is still CRB-free, knock on wood.  We are very mindful of this serious pest and others; hence, we are holding this training to better equip ourselves and establishing this early detection system [DeFence Traps] generously supplied by USDA Forest Service through the University of Guam at no cost.  It is envisaged that similar trainings are also held in the other FSM States in due time,” commented Wichep.  During the training, The Invasive Species Task of Pohnpei (iSTOP) presented its draft CRB Emergency Response Plan (ERP), highlighting the importance of a well-coordinated effort by partner agencies and stakeholders in case of an incursion.  “Yap State also has a Draft CRB ERP in place and we are committed in having ERPs for all FSM States,” added Wichep.  While closing the training, Wichep remarked “this immense responsibility of protecting our islands and their resources is everyone’s responsibility and I hope this is not the end, but the beginning of our efforts in revitalizing our island way and spirit of working together.”

The FSM Department of Resources & Development and the University of Guam would like to thank the following organizations and agencies who had assisted one way or another in the fruition and success of the CRB Training: